On Tuesday evening, the galaxy lost a true icon as Carrie Fisher, best known to many as head strong Princess Leia, sadly passed away after suffering a heart attack on a flight from London to L.A. Although best known for her role in Star Wars, Carrie appeared in a number of other iconic roles including Blue Brothers, When Harry Met Sally and The Burbs. Carrie recently reprised her most iconic in The Force Awakens. 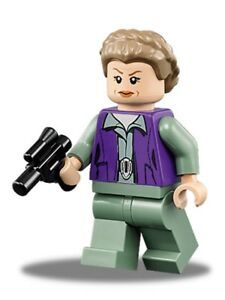 As well as being an actor, Carrie was a keen author and also helped to polish a number of high profile Hollywood scripts including Hook, Last Action Hero, Sister Act, Lethal Weapon 3 and of course many of the Star Wars movies. She also spoke of her struggles with mental health and was a strong advocate of removing the sigma connected to suffering with bipolar and other mental health issues.

So to remember the toughest princess in the galaxy, we thought we’d take a little look at the most loved Princess’ numerous LEGO appearances over the years. Princess Leia has appeared in a number of iconic LEGO Star Wars sets since their debut in 1999. Over the years we’ve seen plenty of variations, largely due to improvements in print detail, along with special hair elements and outfits. As one of very few female characters in the original trilogy, Princess Leia has become a strong role model for equally head-strong girls as well as becoming a key ambassador for younger female LEGO fans with Leia appearing in more LEGO sets than any other female character. So in memory of a Star Wars legend, we take a look at LEGO Princess Leia’s key appearances in LEGO sets over the years.

Princess Leia’s first ever LEGO appearance was back in 2000 in the first version of the Millennium Falcon. Appearing in the set with her iconic buns hair style and yellow skinned Princess Leia, the classic version of Leia would appear in the same guise, with improved printing, flesh toned skin and bespoke face prints in a number of other LEGO Star Wars sets, including the Tantive IV and UCS Millennium Falcon. The classic Leia minifigure most recently appeared in this year’s updated Death Star Set. 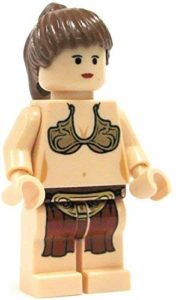 Appearing in her ‘Slave’ outfit, this Leia minifigure was originally coloured in the standard yellow skin tone and also included a fairly generic brown hair piece. Slave Leia would make further appearances in set 6210: Jabba’s Sail Barge in the new flesh tone and again in the 2013 revamp of the same set, where Leia included a brand new and unique hair element. 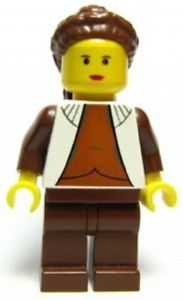 One of the most elusive versions of Princess Leia, is her Cloud City variant included in set 10123: Cloud City. This Leia featured another different hair piece and the classic yellow skin tone. Despite many LEGO sets being re-released over the years, this version of Leia has never reappeared.

Leia in her snow gear has appeared in two different versions one with the classic buns hair piece and again with the braided hair piece. Both version of Hoth Leia included the beige jacket, which Carrie sports in Empire Strikes Back.

The mysterious bounty hunter, Boussh appears at Jabba’s Palace to bargain for Captain Sols’s life, little did Jabba and his cronies know that Boussh was actually Princess Leia in disguise. This version of Leia has only ever appeared in a single set, 2012’s updated version of Jabba’s Palace, which ditched the Slave version of Leia in favour of her more menacing alter-ego Boussh.

In the final film of the original trilogy Han, Luke, Leia and the Rebel Alliance touch down on the forest moon of Endor where they team up with the Ewoks to topple the Empire. Endor Leia first appeared in set 8083: Battle of Endor and again in last years Imperial Shuttle Tydirium set.

As Han, Chewie and the droids are captured by the Ewoks, Leia has already met the forest dwelling bears, who oddly had a new outfit for the Princess and braided her hair. The Endor Forest version of Leia has only appeared once in the soon to be retired Ewok Village UCS set.

With Star Wars return to the big screen with last years The Force Awakens, Carrie Fisher reprised her role as Leia Organa, now a General of the Resistance. This older version of Leia marks one of the Princess’ last LEGO appearances.

Hopefully Leia will live on in future LEGO Star Wars sets where she will continue to inspire other budding young builders, that no matter your age, sex or mental health you can be the toughest princess, Jedi or General in the galaxy.