For any avid brick-building enthusiast, LEGO and Star Wars go hand in hand! The LEGO Group introduced its first Star Wars-themed set back in 1999. In the decades since, around 700 different sets have come out! Not only that, but video games, television shows, and other LEGO Star Wars media has expanded the universe even further.

To celebrate the 40th anniversary of “The Empire Strikes Back,” LEGO is giving collectors and fans a new way to appreciate this iconic film franchise!

The LEGO Boba Fett Helmet is a unique build. Rather than creating a scene from the movie or one of the many ships that race through the galaxy, this set lets you build Boba Fett’s recognizable helmet! You can also get your hands on a Darth Vader and Stormtrooper helmet in the same LEGO series.

Boba Fett is a major antagonist who made his debut in the original trilogy. Unlike other darker characters, his costume is brightly colored and distinct! With this set, you can create a spherical display place in all its bricky glory! 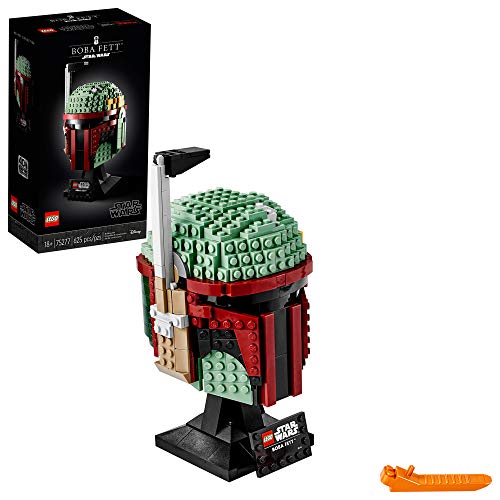 This LEGO set is very different from others you might be used to. The Star Wars lineup has always been a favorite among collectors. Take one look through the secondary market and you’ll find classic sets going for top dollar!

For what seems like the first time in its history, LEGO is exclusively marketing this set to the adult collector! LEGO has always appealed to adult builders, but this one is clearly made for diehard fans. That’s evident with the 18-plus age rating.

Despite the adult rating, there isn’t anything here that’s inappropriate for kids. It includes standard bricks like any other set. The helmet isn’t even that difficult to make!

The set does present some new challenges, but it’s not as complex of a build as some other Star Wars sets. Younger builders should have no problem putting the helmet together at all.

LEGO hit it out of the park when it comes to packaging. Most LEGO sets feature a standard box with some images to represent the contents inside. There’s nothing wrong with those boxes. But this set shows that LEGO is serious about appealing to collectors!

The box is rectangular and vertical, which is a departure from the classic flat boxes. The packaging stands tall, making it worthy of a display shelf. But the beauty of the box doesn’t stop there. The design is worth mentioning, too. 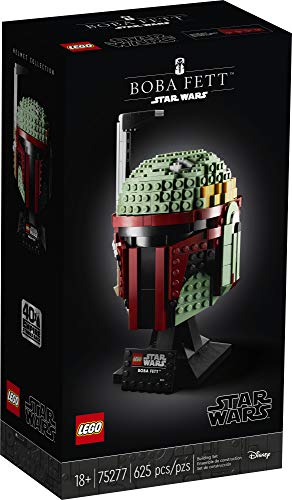 The packaging takes on a minimalistic approach. It’s mostly black and contains an image of the finished build on three sides. That’s it! There are no faux backdrops or over-the-top marketing pictures to show the build in progress. Instead, there’s tons of negative space to produce a clean box you’ll want to show off!

It’s very similar to LEGO’s Creator and Architecture line. The packaging highlights the build and nothing more. A couple of logos here and there for display purposes are all you’ll find. With this clean look, the box will look right at home behind the final build! It’s perfect for Star Wars fans and LEGO collectors alike.

This particular set is part of the 40th-anniversary collection. The collection includes additional helmets as well as a handful of larger builds. All sets of the collection feature the same box design, so you can easily create a museum-style arrangement that turns heads.

What’s in the Box?

Inside, LEGO decided to keep things a bit simpler! It’s standard fare once you get inside. You’ll find several numbered plastic bags filled with all the pieces you need.

There’s also a thick instructional manual. LEGO always does a fantastic job of making instruction manuals that are detailed and easy to follow. But, this one is a bit different. You’ll want to hold onto this manual along with the box! 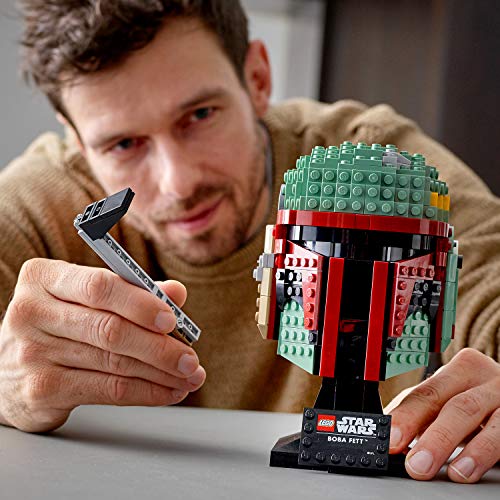 Not only do have step-by-step instructions, but the booklet also contains some high-quality images of Boba Fett. There’s a lot of great information about the character and his place in the Star Wars universe. It’s certainly an interesting read!

Despite the unique nature of this build, the pieces are pretty straightforward. That said, there are a couple of rarer pieces you might not see very often!

Beyond the side-studded bricks, the helmet also comes with a printed nameplate. The nameplate further cements the build’s appeal to collectors. It features the character’s name and sits against the brick-built stand.

Putting the Boba Fett helmet together is a fairly straightforward process. If you have some experience under your belt, it should be a breeze! However, some elements may seem a bit unorthodox at first!

The center of the helmet is quite unique compared to other builds. This isn’t a hollow helmet. There would be no way to create a spherical shape without a foundation to build on. So, the center of the build is one of the most important elements you’re going to work on. 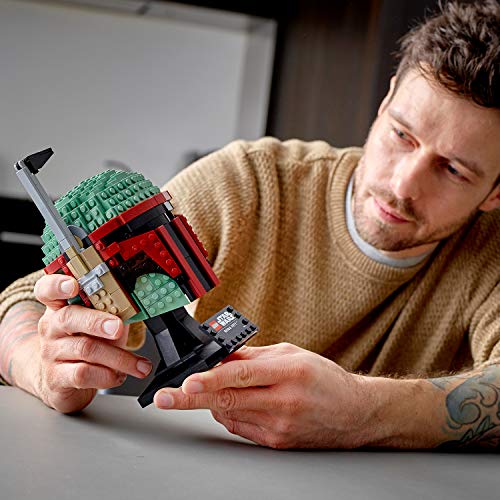 Interestingly enough, LEGO decided to go with brightly colored bricks for the main structure. None of these pieces are visible on the finished build, so it’s not a big deal. In fact, we appreciated the brighter colors. It makes things a bit easier when you’re going through the assembly steps.

The center structure utilizes most of those side-studded bricks we discussed earlier. Pay close attention to how you’re putting this element together. The entire build relies on a solid foundation. Do your best to secure each piece tightly to avoid any issues later on.

Eventually, the helmet will start to take shape! Those iconic elements will make the helmet instantly recognizable. LEGO did not skimp on the details with this set. The helmet has all the signature Boba Fett colors. The top of the dome even features a visible dent, much like the helmet in the films! You’ll also create the macrobinocular view plate, which is hinged and swings down.

The LEGO Boba Fett Helmet set is well worth the investment. It’s not the most challenging build out there. But, it’s a unique set that stands out. The final build is meant to be a showpiece! Once you finish it, the helmet is something you’ll want to put on a shelf next to your other Star Wars memorabilia. LEGO designed this set with that purpose in mind.

This set is a must for any Star Wars or LEGO collector. 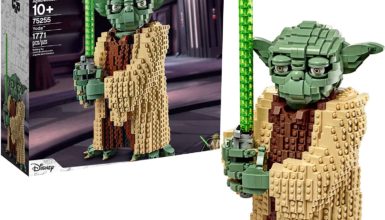 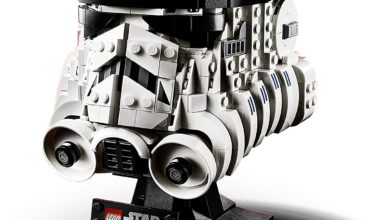 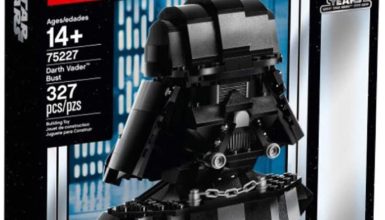