When it comes to building blocks and constructions sets, the LEGO brand is on top. This Danish company cranks out more building kit blocks per year than any other manufacturer. LEGO bricks snap together and lock tight so users can make large and stable creations. All pieces from different eras and sets are compatible with one another.

Every building kit comes with instructions so that builders can make one or more specific items. This makes the sets similar to models. Once constructed, the buildings, vehicles and minifigures can also be played with like regular toys. Of course, children are also free to make their own unique builds. One can make creative play sets or even large, detailed sculptures. The possibilities are endless.

The only downside to LEGO sets is that they can be expensive. Many contain a high number of pieces and are based on licensed properties. These can be factors in the overall cost. Still, parents need not break the bank to provide their children with some great LEGO toys. A little bit of searching can turn up cheap sets that will provide hours of fun for your young builders at home. Here are nine of the best cheap sets available.

What Are The Best Cheap LEGO Sets Available for January, 2023 – Comparison Chart 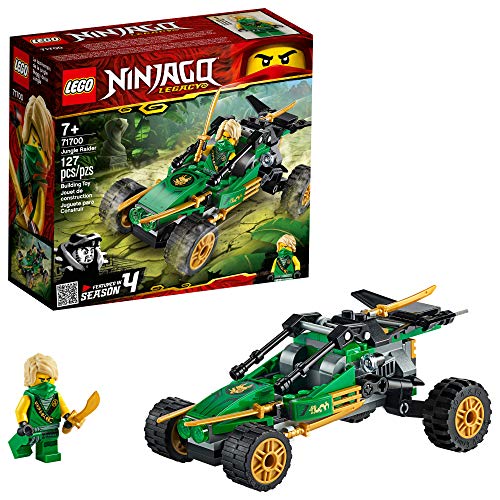 LEGO set number 71700 is part of the Ninjago sub-line of LEGO toys. This subset represents its own unique fantasy world. The set is inexpensive, but it still contains a good number of pieces. This makes it a great value. You get a total of 127 bricks. The package comes with one standard-sized LEGO minifigures.

The main build of this set is a Jungle Raider buggy. Once completed, the buggy is 5-inches long and 2-inches high. Figures can be securely placed in the Buggy.

Also check out our guide to the Best Ninjago LEGO Sets 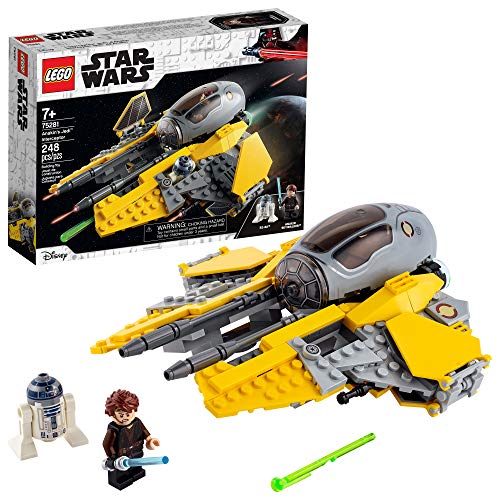 It’s got some pretty cool features too.

At such an affordable price, this LEGO Star Wars building set is a no brainer when it comes to birthday or Christmas presents. A great gift ideas for fans of all ages and tastes.

LEGO City is one of the oldest and longest-running lines of LEGO toys. Just about every type of figure, vehicle and building has been created for LEGO City at one point or another. These sets can be combined to make a sprawling metropolis. Here, in building set number 60182, we have the Pickup & Caravan. The package contains 344 parts and an instruction pamphlet.

This set features a pickup truck with a large camping trailer that can be pulled along. All of the wheels roll nicely and figures can be placed in the truck or trailer. A family of LEGO minifigures is included with a mom, dad and son. All are wearing their best outdoor-adventure outfits. The building set offers a number of accessories to expand play possibilities. You get a fish, crab, camera and propane grill. Chairs and a table are included as well. 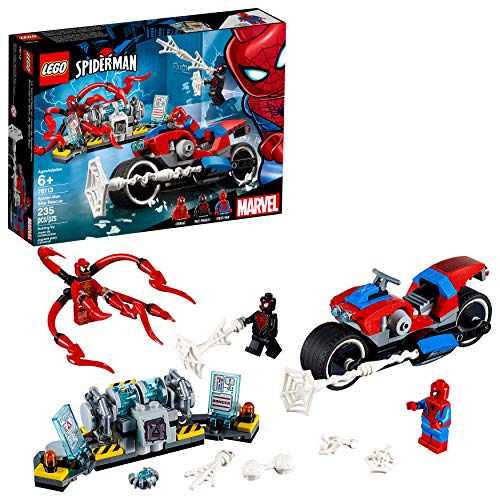 LEGO Marvel Super Heroes set number 76113 features two versions of Spider-Man, one of his iconic villains and his super-powered bike. The building kit contains a total of 235 pieces and instructions. If you know a LEGO fan who loves collecting the minifigures, this small set is a cheap way to snag three very desirable ones. Included is the classic Spider-Man that we all know and love. You also get the Miles Morales version of Spidey. Carnage is included so that the heroes have someone to do battle with.

Carnage features a harness with multiple giant tentacles. In addition to the bike, the set also includes a power generator with a working explosion feature. It’s a great gimmick to enhance play. There are a total of nine web-based LEGO pieces. These can be chained together in numerous ways for use with the figures or vehicles.

Overall this collectible LEGO set is exceptional value and would make a great budget gift idea for birthdays or Christmas. 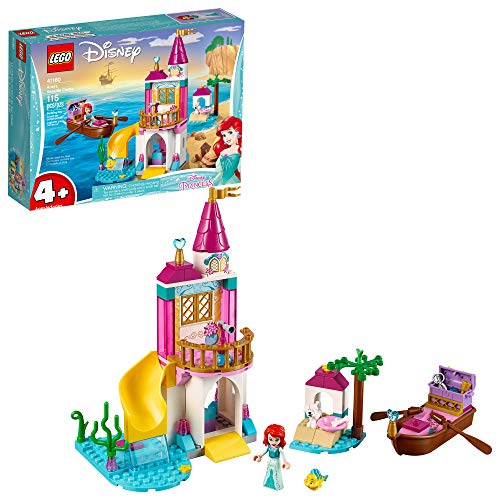 This LEGO Disney Set was designed with the younger LEGO builder in mind. LEGO rates it as appropriate for kids aged four-years-old and up. It contains a total of 115 pieces. You get an Ariel mini-doll figure. These are bigger and less-stylized figures than the type usually found in LEGO sets. They are meant to more accurately represent characters and to appeal to younger children.

Check out the live build video.

This version of Ariel is after she grows legs. Pieces included allow kids to build her sea-side castle. The castle stands 7-inches high once constructed. There’s a balcony on top where figures can look out at the sea with the included telescope piece. One can also build a small doghouse. Ariel’s pet dog and Flounder the fish figures are included in this package as well. Last of all, a row boat can be built complete with two oars and a treasure chest. 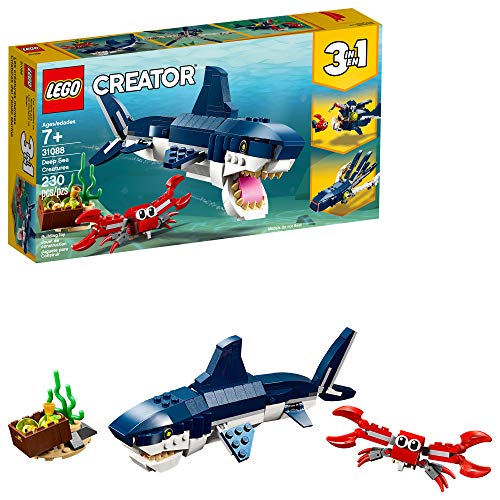 LEGO set 31088 is a special 3-in-1 kit from the Creator series. The package contains 230 pieces and instructions to make three different builds with those same pieces. Builders can make an 8-inch long shark with a treasure chest and a giant crab. The shark and crab both feature several points of articulation. Opening the shark’s jaws reveals pointy rows of teeth inside.

The pieces can then be pulled apart and rebuilt as two other sets. You can construct a giant squid with moving tentacles. You can also make a huge angler fish with a smaller fish for him to chase around. This 3 sets in 1 concept gives kids a lot of extra play and creative fun options. It also makes this already inexpensive set a great value. LEGO rates the building set as best for kids of age 7 and older.

Check out our guide to the Best LEGO Creator Sets to see the best that LEGO creator sets has to offer. 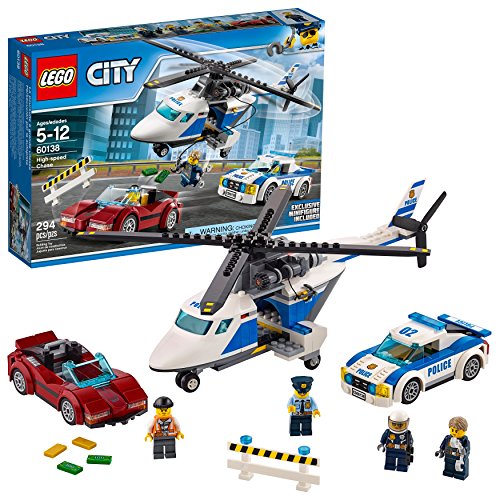 LEGO City set number 60138 comes with 294 pieces and instructions to make three different vehicles. It is rated for kids between the ages of 5 and 12 years old. This set contains four LEGO minifigures. You get a female police-chopper pilot. You also get a standard male police officer. Chase McCain is a smooth-operating police officer figure. Last of all, you get a crook figure who is clearly trying to hide a striped prison shirt underneath his clothes.

Kids get to build a large police helicopter with working rotors. This is the centerpiece of the set and multiple figures can ride in the copter at once. You also get a police cruiser with doors that open and close. The criminal gets his own sporty getaway car too. The cars are approximately 4-inches long. Police weapons and stolen-money bricks are included to round out this fun set. 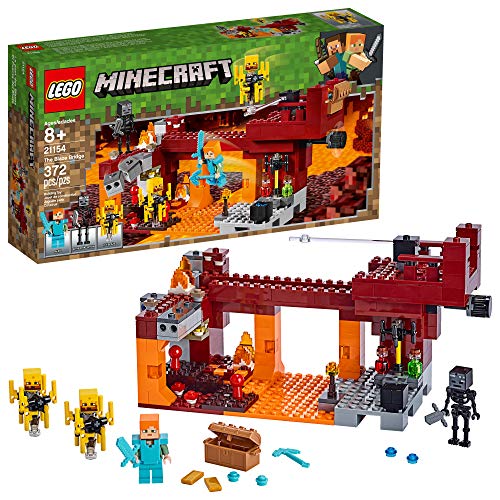 Minecraft is such a perfect property to be turned into a LEGO set. This popular video game already has players using blocks to build whatever their imaginations can come up with. Here, in LEGO set number 21154, we get the Minecraft Blaze Bridge. This 370-piece kit comes with instructions and a total of four figures. You get an Alex minifigure, two blazes and a wither skeleton.

Alex can be decked out in his diamond armor. A treasure chest, weapons and tools are included as well as many other accessories. The main bridge is 4-inches high, 9-inches wide and 5-inches deep. Action features include a rock fall and a mechanism to send those blaze figures flying. Special LEGO bricks here are made to look like nether materials from the Minecraft game. These include lava, gravel, quartz, glowstone and soul sand.

Take a look at even more Minecraft LEGO sets here! 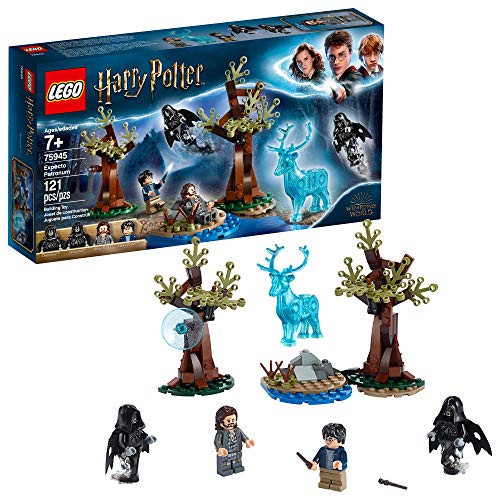 Harry Potter LEGO sets are one of the more popular properties licensed by LEGO. Set number 75945 contains many pieces that are new for 2019. This is a small and inexpensive set of only 121 pieces plus instructions. It is rated for kids aged 7 years old and older. This is another great set for minifigure collectors as it contains a total of four of them.

For figures, this kit gives you Harry Potter himself. His look is based on his appearance from the film “Harry Potter and The Prisoner of Azkaban.” Also included are Sirius Black and 2 Dementors. The set builds a woodland area with two trees, a lakeside scene and a glittering stag figure. This pack also contains Harry’s wand accessory for some serious spell-casting role-play. 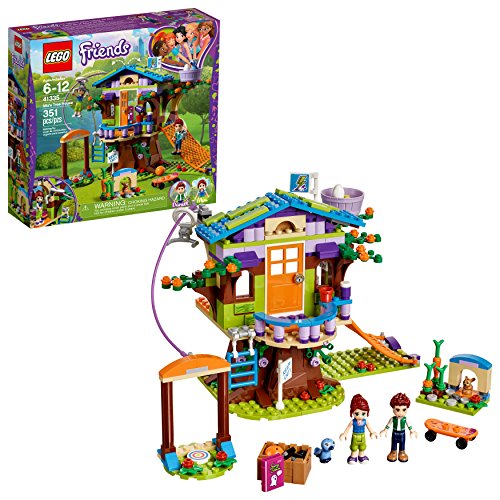 The LEGO Friends series of sets was designed to appeal to girls. Just remember, as LEGO themselves note, all sets are fine for boys or girls. This set is rated as perfect for those between the ages of 6 to 12 years old. This set number 41335 contains a total of 351 parts and an instruction booklet for the build.

The main build here is a charming tree house. The house provides numerous play features such as a ladder, a slide and a climbing net. Characters can even use a zip-line or roll around on the included skateboard accessory. Two LEGO mini-doll figures are included here as well. You get a girl figure named Mia and a boy named Daniel. This set is packed with accessories such as torches, board games, food items and more. When completed, the tree house stands around 6-inches tall. 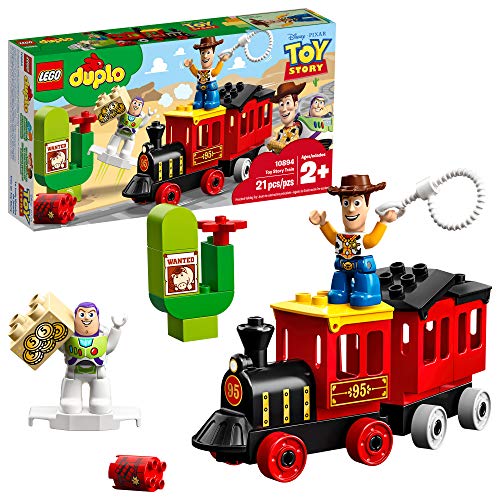 The LEGO DUPLO Toy Story Train set contains a total of 21 pieces. It is rated as appropriate for kids ages 2 and up. DUPLO sets are kind of like a sub-brand of LEGO that are designed for the youngest builders. The pieces are larger and easier to handle. Instead of the smaller minifigures, they even feature larger characters for young children to play with. This specific set features DUPLO figures of both Woody and Buzz Lightyear, the main two characters of the Toy Story films.

Kids will be able to build a simple train with an engine and one car. Both train parts feature opening roofs. This allows kids to place figures inside and to have better access for role-play purposes as they make the figures interact with the environments. There is also a wanted sign, Woody’s lasso, a cactus and a bank vault. Several LEGO DUPLO bricks are decorated to look like money for some extra accessories. 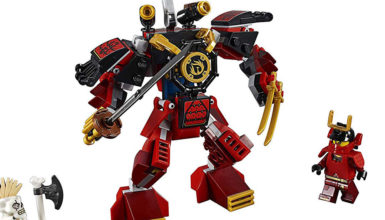 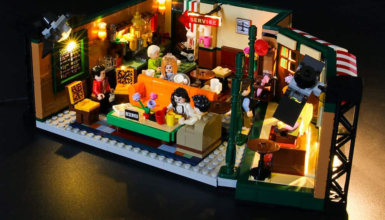