The Powerpuff Girls cartoon features three little girls coming together as superheroes to fight Mojo Jojo, a monkey who can talk. Popular with both adults and kids, it aired in the early 2000s and came back with a new version that featured the same top characters. Many of the top LEGO sets of The Powerpuff Girls are designed for kids as young as six and perfect for older fans of the cartoon too. These building sets come with bricks that you can use according to the directions to build figures and sets the look exactly like those on the boxes.

There are also LEGO sets that are part of the Dimensions line. You can place these figures on your LEGO pad and unlock a whole new world of adventures. The Dimensions kits work with XBOX and other consoles. You can play dozens of games and use Blossom and the other characters in adventures based on the other figures that you own. LEGO fans of all ages who love The Powerpuff Girls will also love some of these sets. There are some great Powerpuff Girls LEGO sets that you can use with your kids and on your own and those that make great gift ideas too. 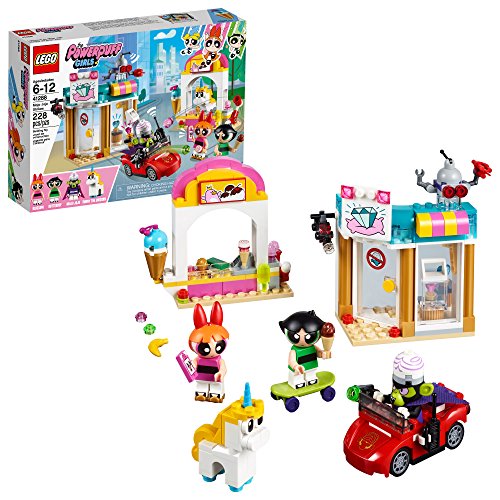 Blossom, Buttercup and Bubbles come together in this LEGO building kit to fight the dastardly Mojo Jojo. With larger pieces and bricks, this set is good for kids six to 14. It comes with four minifigs that you can use in different ways. Two of those minifigs look exactly like the Blossom and Buttercup characters from the cartoon. While Blossom wears her trademarked pink dress and roller skates on her feet, Buttercup wears her iconic green dress and fits onto the top of a skateboard in a matching shade of green. The Mojo Jojo minifig wears his classic purple cape and a small turban on his head. You also get a minifig of Donny the Unicorn to gallop around the finished set.

The included LEGO bricks let you build a fantasy world that fits the look of the cartoon. Not only can you build a small ice cream shop, but you can build a separate diamond shop too. The idea is that Mojo Jojo will break into the diamond shop while the girls are eating ice cream. They can then use their skates and the skateboard to track him down and stop him. Some of the included bricks make accessories for the two characters also, including ice cream cones, a smartphone and a large pink diamond. There are also bricks included to make the red car that Mojo Jojo uses during his escape as well as some weapons for him. 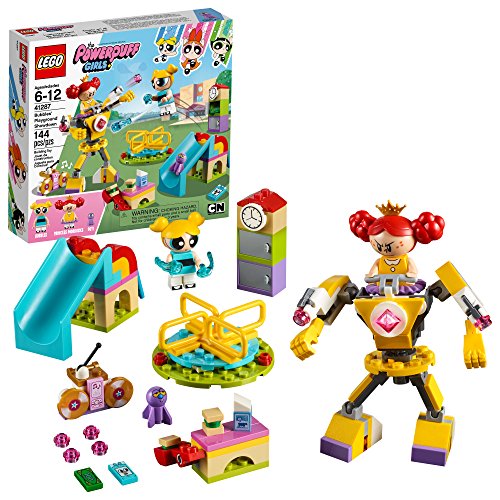 When you put this set together with the last one, you get all three of the main characters and enough bricks to expand the cartoon world. Bubbles’ Playground Showdown comes with a Bubbles’ minifig that is ready to do battle. Wearing her blue dress, she comes with blue flames that fit into her hands, which shows the villain that she’s ready to do battle. Also included is a minifig of Princess Morbucks. She wears a gold crown on top of her red hair and a bright yellow dress. To increase the action, LEGO includes a mech suit for the princess. You’ll build this suit out of bricks and create a piece that stands three times the size of Bubbles. The Princess Morbucks minifig fits into the top of the suit, which has pink diamonds attached to the front and blasters on each arm. That figure works with the adorable little minifig of Octi that comes included too.

To make the playground set, LEGO gives you all the bricks needed to create the same fun equipment and rides that you would see on a real playground. Some of those bricks make a merry go round with a green base and yellow handles on the top. This piece will spin when you turn it and has two attachment points for your minifigs. You can also build a storage locker with two lockers that open and a slide that your minifigs can go down. With the included 144 bricks, you can let your imagination run wild and create loads of adventures for Bubbles and the other Powerpuff Girls. 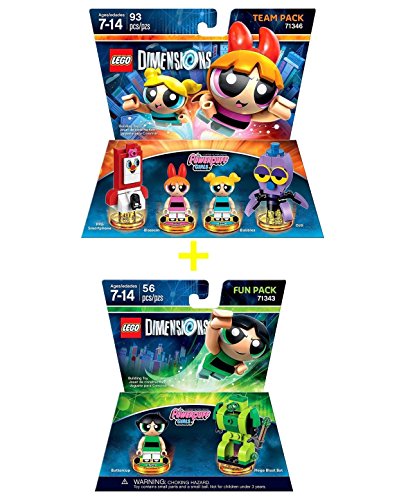 Why settle for just one LEGO Dimensions set? With this bundle, you get two different sets that provide tons of fun for Dimensions players. The Buttercup Fun Pack is just one of the included toys. It comes with a Buttercup minifig and a minifig of the Mega Blast Bot, which uses the same shades of green as the girl figure does. Both of these minifigs have a gold disc on the base that lets you display the figures on a shelf. Those bases also let you connect the minifigs to your LEGO pad and release new adventures.

Also included is the Team Pack, which comes with four different minifigs. You get both Blossom and Buttercup, which lets you round out The Powerpuff Girls team. Blossom comes dressed in an adorable pink dress with a matching bow in her red hair, while Bubbles wears a blue dress and has her blond hair pulled back into pigtails. The included PPG Smartphone minifig has a whimsical face on its screen. There is also an Octi minifig that comes complete with a funny face and tentacles. Each figure in the set has a gold disc on the base that helps you display them around your home. You do not need a specific gaming system to use these figures as part of a Dimensions game because they are compatible with all systems that use a LEGO pad. You simply put them on the pad and start playing. 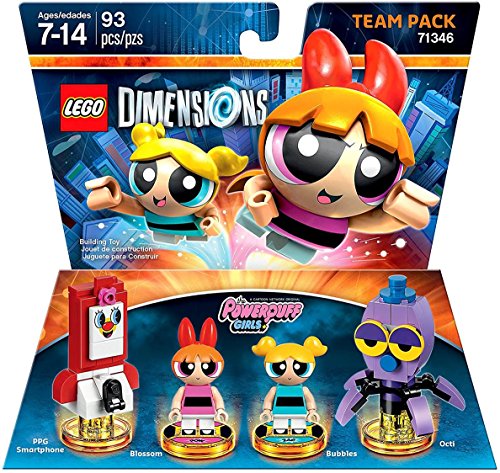 With LEGO Dimensions, you can play in a virtual world that includes characters from all your favorite television shows, films, games and cartoons. Warner Home designed this set with help from LEGO for fans of The Powerpuff Girls. As long as you have the pad for the Dimensions series, you can set any of the included figures on it. This unlocks game levels based around the cartoon. Once you play through them, you can use the minifigs as characters in all your other unlocked levels. It comes with minifigs of both Blossom in a pink dress and Bubbles in a blue dress. The PPG Smartphone minifig adds to the fun and lets you save the world with the girls, while the Octi minifig serves as the main villain for some of the levels.

With the Dimensions set, you can build both Powerpuff Girls in the virtual world and play with them in the multiverse, which includes all of the levels you own. You can use both the Rainbow Beam and the Heat Vision powers that the characters have too. Entering the Adventure World gives you full access to the new levels, including Rainbow Land. It comes with replicas of the professor’s lab as well as Pokey Oaks Elementary School. As a LEGO Dimensions player, you have the option of bringing other characters from other franchises into those levels and adding Buttercup and other characters from The Powerpuff Girls too.